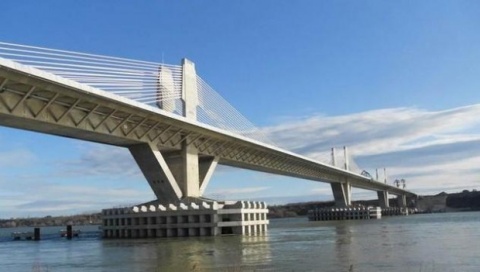 The new bridge on the Danube between Bulgaria and Romania, until now known as Danube Bridge 2, will be named New Europe. Photo by BGNES

The new bridge on the Danube between Bulgaria and Romania, until now known as Danube Bridge 2, will be named New Europe.

The announcement was made Saturday by Bulgarian Transport Minister, Danail Papazov, speaking for Darik radio.

Papazov informed the Romanian side was a firm supported of the name, and the Bulgarian one liked it as well.

Papazov is negotiating an agreement with Romania to lower the toll fees for the use of the bridge. He says that if Romania refuses to do so, Bulgaria will reduce the toll unilaterally.

The long-anticipated event was, however, marred by the scandal triggered by the election of controversial businessman and MP Delyan Peevski as the new head of Bulgaria's State Agency for National Security (DANS), a move that caused mass outrage and protest rallies in the country.

After learning the shocking news, Bulgarian President Rosen Plevneliev canceled his participation in the inauguration of the second Danube Bridge linking Bulgaria and Romania.

Papazov told Darik radio Saturday it was regretful the opening of the bridge did not receive enough coverage in the country.

When asked if the Cabinet was dependent on the election of a certain individual at a certain post, the Transport Minister said he had not noticed any dependencies and enjoyed working with Prime Minister, Plamen Oresharski.

Papazov explained that as former Director of the Varna Port, he knew well the Transport Ministry, adding he was not planning any reshuffles of the staff there for the time being, in order to give an opportunity to the good experts to continue their work.

He did, however, note that some people could be replaced if they fail to deliver what is required in order to boast public companies in the transport sector.