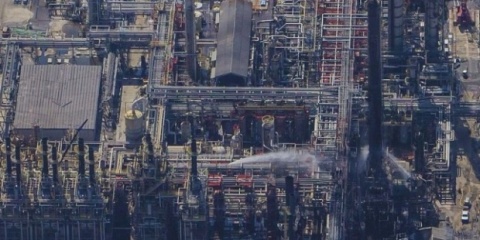 On Thursday, a blast happened at the Williams Olefins chemical plant in Geismar, south of Baton Rouge, LA, US. Photo by EPA/BGNES

A second blast has shaken the US State of Louisiana Friday night after the deadly Thursday incident in a chemical plant in nearby Geismar.

The latest explosion in Donaldsonville killed one and injured seven people.

Nitrogen was being offloaded by hose from an 18-wheeler when the pressure built and caused the explosion, according to local police.

The blast sent scatter pieces of metal and did terrible damage to the area, a LA state trooper is quoted in saying.

The explosion occurred at a CF Industries facility. CF Industries manufactures ammonia and other nitrogen fertilizers at its Donaldsonville plant.

This isn't the first deadly blast at the company's Donaldsonville plant. Three workers were killed and nine others were injured by an explosion and fire at the facility in May 2000.

On Thursday, a blast happened at the Williams Olefins chemical plant in Geismar, south of Baton Rouge.

Two people were killed and several were injured.