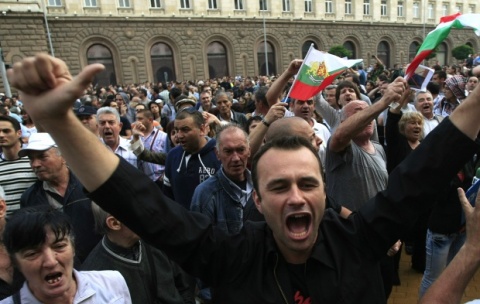 Over 10 000 people attended the rally in the Bulgarian capital Sofia against the election of a controversial businessman and MP as national security chief. Photo by BGNES

New protest rallies are planned in Bulgaria against the election of controversial businessman Delyan Peevski as the new head of Bulgaria's State Agency for National Security (DANS).

The protest in Sofia Saturday evening will be held once again in front of the Council of Ministers.

Outside Bulgaria, a rally is scheduled for Saturday evening in front of the European Parliament building in Brussels.

The Parliament voted Friday to approve the nomination of Prime Minister, Plamen Oresharski, who proposed to have Peevski, a controversial Member of the Parliament from the liberal ethnic Turkish party Movement for Rights and Freedoms (DPS), to lead DANS.

Oresharski then proceeded to nominate Peevski. The controversial MP was then quickly elected as the new head of the agency with the votes of his own party and the Bulgarian Socialist Party, BSP, despite GERB returning to plenary hall and a repeat vote on their request.

According to official data of the police, over 10 000 have gathered in the capital.

He criticized it strongly and urged the parliament to "immediately" retract its decision.

Speaking on public TV Friday evening, the President reiterated his outrage from the move and confirmed he has lifted his trust from the Cabinet "Oresharski."