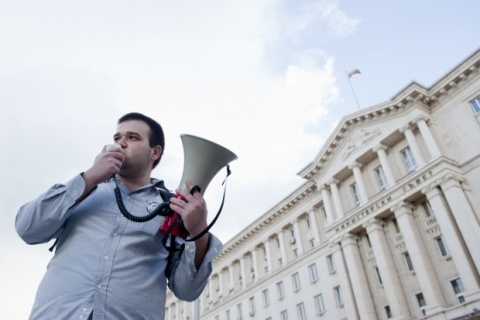 Thousands joined the rally in front of the Council of Ministers in downtown Sofia. Photo by BGNES

The election of controversial businessman Delyan Peevski as the new head of Bulgaria’s State Agency for National Security (DANS) has stirred outrage in Bulgaria, triggering protests in major cities.

Thousands joined the rally in front of the Council of Ministers in downtown Sofia.

Oresharski then proceeded to nominate Peevski. The controversial MP was then quickly elected as the new head of the agency.

Bulgarian President Rosen Plevneliev canceled his participation in the inauguration of the second Danube Bridge linking Bulgaria and Romania after the shocking election.