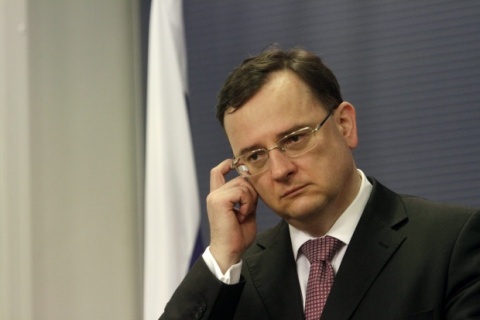 The assumption is based on the unprecedented anti-mafia police operation raiding the Defense Ministry and other offices and agencies on June 13, the Bulgarian National Radio (BNR) reported.

Czech Republic's police for the fight against organized crime has arrested a number of senior members of the ruling center-right Civic Democratic Party.

The operation disturbed the political scene of the Czech Republic amid lack of information on the part of police and prosecutors.

Among those detained are the Chief of Staff of the Prime Minister, former ministers, chiefs of military intelligence, politicians and lobbyists.

More information on the operation in Prague and in other areas of the country and on the charges is expected today from the police and the prosecution.

The opposition Social Democrats called for PM's immediate resignation, as well as for the resignation of the Cabinet and for early elections.

Necas is expected to speak before the Parliament later Friday. There will be a number of additional meetings with the President Milos Zeman by the end of the day.

"A year before the elections for the Lower House, the Prime Minister should have a clear position on what happened, "Lidove news" writes.

In order to protect his position as PM, Necas will need the support of the coalition parties.

"Hospodarske news" said that the police probably would not have arrested such senior politicians and officials, unless they had sufficient evidence.

This moment is important for the credibility of the police, "Young Fronts Today" reminded. The police action may bring so much dirt to the light so that it changes the whole political scene," the newspaper underscored.

The news on the arrests was reported June 13 by the Bulgarian BGNES agency, citing Russia's ITAR-TASS.

According to the report, they include the former Chairman of the Civic Democratic Party, Petr Tluhor, former Agriculture Minister, Ivan Fuks, and former MP, Mark Schneider.

The detainees are all said to be close to Necas.

Necas has also been visited by the police, Interior Minister Jan Kubice told the MPs, but did not disclose details about the visit.

Charges have been pressed against seven of the arrested politicians, but the exact counts remain unknown, Czech media further report.

Necas was elected PM in 2010, but does not have a stable majority in the Parliament.