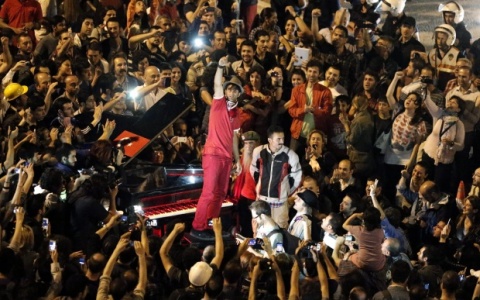 The Confederation of Trade Unions of Public Sector Employees (KESK) threatened that if there is police intervention in protests on Taksim square in Istanbul, 240 000 employees will leave work and flood the streets of the whole Turkey.

"Ever since the resistance began, KESK is on the side of the people and is part of them and would not hesitate to take its historical responsibility," says the statement of the syndicate.

"KESK calls for all public sector employees to join the protesters at 9 pm in all provinces of the country and above all on Taksim square in Istanbul," the statement notes.

"Also, if the police intervene tonight at Gezi Park, all public sector employees will leave work and will hold rallies in the centers of their cities. This decision we took is valid not only for tonight but will be valid at any time there is police intervention in Gezi Park," the statement of KESK also says.

The rallies spread quickly, engulfing a number of major cities, and eventually turned into demonstrations against the authoritarian and Islamic-leaning policy of the Turkish government and of Prime Minister, Recep Tayyip Erdogan.

Erdogan held overnight talks with members of a key protest group where the idea of a referendum on the future of Gezi Park has been discussed once again.

The talks took place in the capital Ankara, just hours after Erdogan issued a "final warning" to demonstrators and a 24-hour deadline to crush the protests.

The Turkish PM announced Friday that rallies in support of the government will be held on June 15 and 16 in Istanbul and Ankara.

"These rallies do not aim at opposing one group of Turkish citizens to another, but they will give tribune to the silent majority and will show to us and the world the real face of Turkey," Erdogan is quoted in saying by Turkish media.