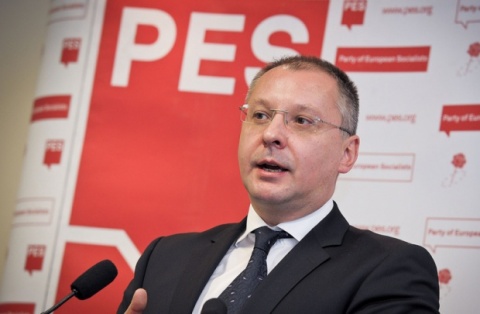 Bulgarian Socialist Party leader Sergey Stanishev reportedly warned his MPs that the Socialist-led government’s rule would be over if they did not support the nomination of controversial media mogul Delyan Peevski for new head of the State Agency for National Security (DANS).

“If you do not support the nomination of Peevski, the Cabinet will resign,” Prime Minister Plamen Oresharski told BSP lawmakers on Friday.

His statement was backed by Stanishev, BSP MPs have told local media.

Stanishev and Oresharski claimed that anti-government protests organized by “criminal groups” would be staged.

They claimed Peevski’s “strong hand” would deal with the protests.

Oresharski then proceeded to nominate Peevski.

The controversial MP was then quickly elected as the new head of the agency.

More about Delyan Peevski can be read HERE and HERE.

The move stirred outrage in Bulgaria, with some 12000 joining a Facebook page calling for a protest against the election.

Protest rallies are to take place across the country at 6:30 pm Friday.