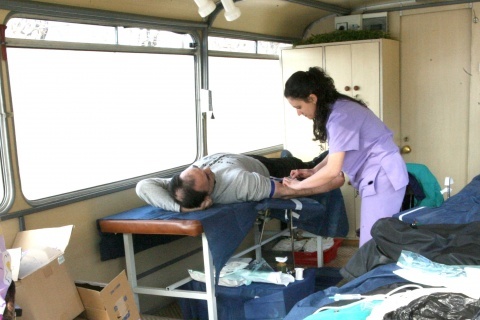 A national system will connect Bulgaria's National Center of Hematology and Transfusion to the five regional centers and the 23 blood donation departments that are based in regional hospitals. File photo

Bulgaria's National Information System for Transfusion Hematology will be launched by the middle of 2014, Prof Fani Martinova, Director of the National Center for Hematology and Transfusion, has announced.

The Bulgarian news agency BGNES reported Thursday that the project has a total value of BGN 500 000 and was financed by the Program for Human Resource Development. "Information Services" will address the realization of the project which involves two stages.

A system will connect the National Center of Hematology and Transfusion to the five regional centers and the 23 blood donation departments that are based in regional hospitals. The system will receive real-time information on the availability of blood and on the blood obtained from donors. Each blood donor will have an electronic record and will be able to trace the path of each blood product from the moment it was donated to the moment it was tested and received. This, according to the project leader Dr. Veselin Sivov, will reduce the waste of blood and the risk of infecting it.

The second stage, which is under construction, involves the creation of a web portal. This portal will provide the infrastructure needed to connect the central database, the national center, the regional offices and the Transfusion Hematology departments.