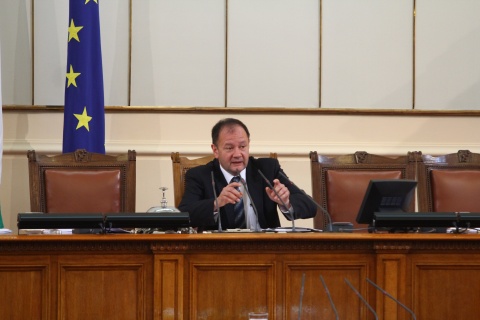 At the beginning of Wednesday's sitting of Parliament, Mikov announced that the use of biometrics would put an end to the practice of voting with other MPs' cards. Photo by BGNES

Bulgarian Members of Parliament will use the biometric voting system starting Wednesday, according to Parliament Chair Mihail Mikov.

At the beginning of Wednesday's sitting of Parliament, Mikov announced that the use of biometrics would put an end to the practice of voting with other MPs' cards.

The use of biometrics was introduced in early 2010.

However, the process of collection of biometric data and their integration into the MP cards in Bulgaria's 42nd National Assembly was delayed, which caused center-right party Citizens for European Development of Bulgaria, GERB, to accuse the Bulgarian Socialist Party, BSP, and the ethnic Turkish Movement for Rights and Freedoms, DPS, of reintroducing the distorted practice of voting with the cards of other MPs.

Prior to the start of Wednesday's parliament sitting, GERB MPs protested that an electronic board keeping track of the voting process was missing from the plenary hall.

Krasimir Velchev, Deputy Chair of GERB, asked Mikov why the device was missing, suggesting ironically that its removal was part of the policy aimed at increasing transparency.

Velchev cautioned that the step was unacceptable because it restricted the MPs' access to information and made it impossible for society to monitor the work of Parliament.

Mikov made clear that the electronic board had been taken out of the plenary hall at his request because it had been granting privileged access to information to one parliamentary group.

He suggested that the plenary hall needed two other electronic boards to ensure equal access to information for all members of parliament.