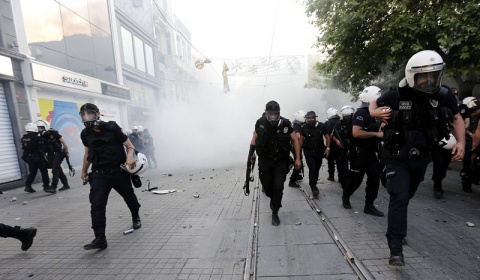 The Occupy Gezi protests have become notorious for the widespred use of crushing police force. Photo by Occupy Gezi at Facebook.

Six Turkish policemen have committed suicide since the start of widespread protests in the last week of May, according to information held by a Turkish police trade union.

The suicides are due to the dire conditions of work of policemen, according to the Emniyet-Sen syndicate leader Faruk Sezer.

This include 120-hour shifts and involvement in many acts of police brutality, for which the peaceful Turkish protests became notorious.

Some policemen deployed to protest hotspot Istanbul from elsewhere have had to sleep in the streets on their shields, says Sezer.

Official Turkish authorities claim that the suicides have nothing to do with the protests and are a result of personal misfortunes of those who claimed their own lives.

At present the police trade union is gathering evidence of the extremely harsh conditions under which Turkish police are made to work, and intend to deliever those to the prosecution.

Wide-scale protests erupted May 31 in Turkey, at first to protect the Gezi Park in Istanbul, but then quickly acquiring a much wider direction against the perceived authoritarian nature of the rule of longtime Turkish PM Recep Tayyip Erdogan, and his apparent desire to push the country away from secularism.