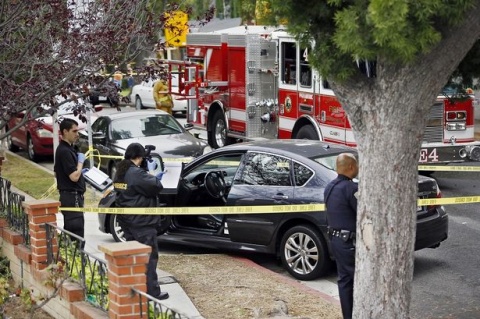 Four people were killed Friday after a gunman went on a shooting rampage around a college in Santa Monica, California.

The suspected shooter is also dead amid gunfire on the college campus, police said, making him the fifth victim.

This is the latest dead toll as between 6 to 8 fatalities were reported earlier.

In addition to the dead, at least five people were injured, police said. They included one critically injured person whose life was in jeopardy, a person hospitalized in serious but stable condition and three people sent to hospitals with less serious injuries.

Santa Monica Police Chief Jacqueline Seabrooks initially said "as many as six" victims, plus the suspected gunman, had been killed in the rampage. But police later lowered the death toll to four dead, plus the suspect.

The rampage began at a house and ended on campus where the gunman was shot dead in the library of Santa Monica College.

Authorities first responded to a report of shots fired at 11:52 a.m. PT and found a house on fire. They also found two dead bodies inside.

The gunman was dressed in black and armed with an AR-15 assault-style rifle.

After the house, the suspect opened fire on a car, killing the driver. The shooter fled the scene in a vehicle.

The violence then moved to a street corner near the college, where the suspect fired at passing motorists before moving into the college campus and going to its library. There, he shot at least one person.

Initially, police were on the lookout for a second shooter. Elsewhere on the campus, a person of interest was taken into custody, then released when his claim not to be involved checked out.

The authorities now believe it was a single gunman.

The college is streets away from a fundraising event that was attended by President Barack Obama on Friday. His schedule was not interrupted.