Protests in Turkey Undying in Defiance of Erdogan 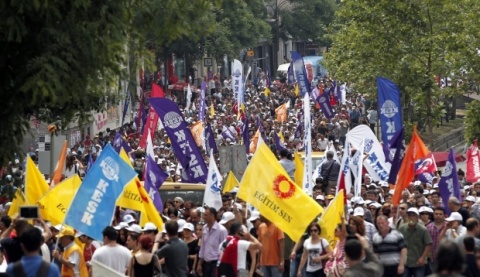 New clashes between demonstrators and riot police have been reported overnight in Turkey as the anger against the actions of Turkish Prime Minister, Recep Tayyip Erdogan, is not subsiding.

The conflict has moved way beyond Istanbul's central Taksim district to distant neighborhoods of the huge city. Rocks, stones, and Molotov cocktails have been thrown in one of them – Gaazi, according to the Bulgarian bTV. Police have responded with teargas and water cannons. Demonstrators have been hurt, but there is no official data on the injuries.

Meanwhile, the rally on Taksim square stared Friday evening with a concert of a French band. The musicians have postponed all their shows for the next two weeks in order to support the protests in Istanbul.

Tens of thousands of people have attended the rally and the concert.

As reports of tremendous show of support have been pouring in from neighboring Turkey, another one was added to them after the fans of the three top football clubs, Galatasaray, Fenerbahce, and Besiktas, joined together in an unprecedented move to protest against Erdogan.

For several days now, police are staying away from Taksim square, but volunteers keep temporary stations ready to provide first aid or to feed the hungry and exhausted protesters. Hundreds of tents have been erected in the park where everything started over a week ago, and thousands of people practically live there now. Many have brought their children for whom makeshift playgrounds, a daycare and even a library have been made.

Turkey has seen tireless civil unrest sparked by a police crackdown on a local protest over an Istanbul park.

Four people, including a police officer, are reported to have died since the protests began, with thousands more hurt and hundreds arrested. There are fears that the dead toll might be much higher than the official reports.

The government says more than 500 police officers are among the injured.

Erdogan softened his stance Friday, in announcing he was open to all democratic demands, but would not tolerate violence. He is however still defiant about construction plans in Taksim.