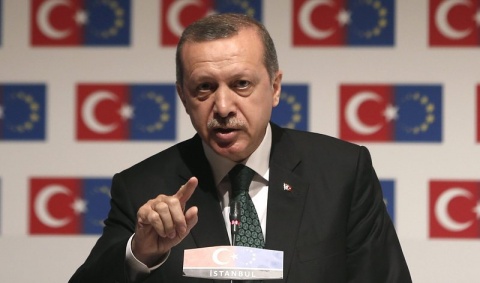 Turkish Prime Minister, Recep Tayyip Erdogan, has reportedly soften his stance Friday, in announcing he was open to all democratic demands, but would not tolerate violence.

"We are against violence, vandalism, and actions that threaten the rights and lives of others for freedom's sake; we greet with an open heart those who come with democratic demands," said Erdogan in a speech in Istanbul.

He stated he understood what it was to protect the environment, but stressed to love nature did not equal vandalism and killing people.

Late Thursday night, Erdogan was welcomed back to Turkey from a trip to northern Africa by thousands of cheering supporters who waited at the airport to hail him.

It was the first major show of support for him following a week of protests in which his opponents have called for him to resign.

Erdogan greeted the crowd and called for an immediate end to the riots. He pledged police brutality would be probed.

The Turkish PM, however, stood defiant to EU calls to investigate the excessive use of force by police against anti-government protesters.

The request came from EU Enlargement Commissioner, Stefan Fuele, who was speaking ahead of talks on Turkey's ambition to join the EU.

The BBC reports that in response the Turkish PM had said similar protests in Europe would be dealt with more harshly.

Turkey has seen a week of civil unrest sparked by a police crackdown on a local protest over an Istanbul park.

Fuele and Erdogan were both speaking at a conference in Istanbul on Turkey's relations with the EU.

The EU enlargement commissioner stressed the EU had no intention of giving up on Turkey's accession, but Turkey had to maintain values of freedom and fundamental rights.

Four people, including a police officer, are reported to have died since the protests began, with thousands more hurt and hundreds arrested. There are fears that the dead toll might be much higher than the official reports.

The government says more than 500 police officers are among the injured.