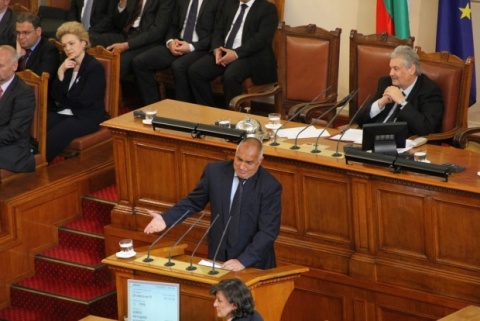 The parliamentary group of the formerly-ruling center-right Citizens for European Development of Bulgaria party, GERB, is leaving the Parliament.

Earlier Thursday, the Members of the Parliament from GERB boycotted the sitting, leaving it without quorum. They returned around 9:30 am only for Borisov to issue his statement from the parliamentary tribune.

In it, he explained he needed time to think about and grasp what has been and is happening in the Parliament and accused its Speaker, former Interior Minister, Mihail Mikov, from the Bulgarian Socialist Party, BSP, of allowing the leader of the far-right nationalist Ataka, Volen Siderov, to freely insult GERB MPs and provoke scandals.

"In any other General Assembly, such behavior would have been condemned, but you depend on Siderov, and you are not stopping him. At the same time, you act here as you have been the ones to win the elections, while GERB is the true winner. I am asking you, what gives the right to parties 3 times smaller than mine to judge, offend, be arrogant, and make insane proposals here, including appointing ad hoc committees that will work without a quorum. You created a Cabinet and elected a Speaker without a quorum? You felt as strong as to impose dictatorship and launch large-scale revanchist actions," said Borisov.

He further accused the new rulers of appointing corrupt people at senior posts, resurrecting plans to build a second Nuclear Power Plant, NPP, in the Danube town of Belene with Russian participation, backpedaling on the full smoking ban, and mocking, humiliating and challenging with provocations GERB – the party designated by voters as the elections winner.

Borisov stated his group will leave the Parliament and will focus on being among common people and meeting with voters. He reminded GERB demands to have the May 12 vote void and to hold new general elections.

It emerged that from now on, GERB MPs, will show up in the Parliament, but will not register to vote and/or participate in debates; they will criticize the work of the 42nd General Assembly in the hallways, speaking for the media.