Turkish Demonstrators: We Will Not Bow 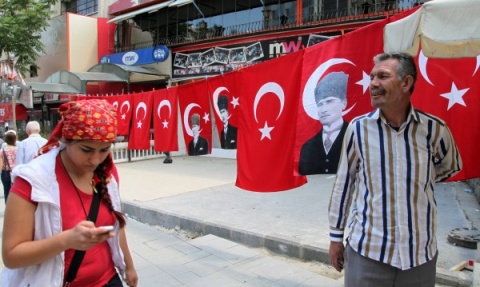 A man sells flags in Istanbul with the portrait of Mustafa Kemal Ataturk, the first President of Turkey, who is credited with being the founder of the secular Republic of Turkey. Photo by BTA

The protests in neighboring Turkey have continued Wednesday night into Thursday morning for a sixth straight day, but for the first time, no violence has been reported.

Wednesday evening, protesters, gathered at Istanbul's Taksim Square, called for the police chiefs in all cities, where rallies took place, to be dismissed.

The activists also said they wanted a ban on the use of teargas, the release of detained protesters, the dismissal of Istanbul's governor, and the scrapping of plans for the redevelopment of Gezi Park in Taksim.

In Istanbul, the demonstrators held banners, addressed to Turkish Prime Minister Recep Tayyip Erdogan, reading: "This nation will not bow to you!" and "Taksim Square is everywhere!"

In the capital Ankara, police used again teargas and waters cannon to disperse crowds after protesters erected barricades and set them on fire.

Nobel Prize winner and prominent Turkish author, Orhan Pamuk, has joined many other intellectuals in his country, voicing support for the protests, which began on May 28 over plans to redevelop Gezi Park.

It is the only remaining park in Taksim, and it was supposed to make way for the rebuilding of an Ottoman era military barracks to house a large shopping center.

There have been three officially reported fatalities in the unrest and thousands have been injured in Istanbul, Ankara, Izmir, and other locations, since the protests began on Friday - including hundreds of police officers.

Against the backdrop of the tensions, and calls for him to resign, Erdogan headed for Morocco, where he issued a statement saying that things would go back to normal within days. He is to return to Turkey Thursday, where new developments are anticipated due to his arrival and because more are expected to protest over the weekend as they will be off from work.

Erdogan insists the protests are undemocratic and were being provoked by the opposition Republican People's Party (CHP).

Speaking in a televised interview Sunday, he labeled the demonstrators "a few looters" and strongly criticized social networks, singling out Twitter, which he said was "an extreme version of lying and a menace to society."

However, his Deputy, Bulent Arinc, who has been standing in for him, said Tuesday that the original protests had been "just and legitimate" and that the "excessive use of force" by police had been wrong. He apologized to the injured, but also called on the demonstrators to bring an end to the unrest.

Twitter, Facebook, and internet services altogether are down in many sections of Istanbul and other large cities. The phone lines to Turkey are experiencing difficulties as well.

According to the BBC and the Bulgarian bTV, reporting from Istanbul, many of the protesters appeared to be young, urban middle class, and irritated at what they see as Erdogan's move towards Islamization.

In the Parliament, CHP have called for snap elections as remedy for the political turmoil.