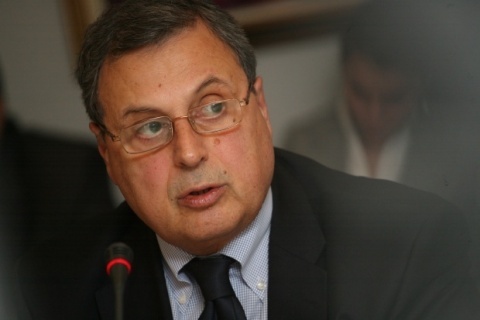 The Chairman of the Bulgarian Industrial Association, BIA, Bozhidar Danev. Photo by BGNES

Bulgaria faces a national catastrophe and urgent and radical measures are needed, the chair of the Bulgarian Industrial Association, BIA, Bozhidar Danev said.

Speaking for the private TV channel Bulgaria On Air, the businessman stated that he has a proposal of a set of measures to be applied instantly with results visible after a year, but refused to clarify them, noting "when the government asks us, we shall tell the measures."

He said the business would be generous to the new Governmet, sworn-in last Wednesday, and headed by PM Plamen Oresharski, and was going to give the new PM 200 days of trust, although the economy is in a deplorable state.

The budget revenue that goes predominantly to the social sector, as it uncludes budget-financed salaries of the State servants, is the main problem of the country, Danev stressed.

Danev explained that the GDP data that has been published may not be accurate as there were no investments in the country last year; the consumption decreased; the deficit increased, thus "there was no economic logic for the GDP to be going up."

He is absolutely sure that the BGN 17 M spent by the former Cabinet of the Citizens for European Development of Bulgaria party, GERB, was the reason for the very poor economic condition of the country.

"Reforms in all spheres are needed, as there is no institution in Bulgaria working by the standards of developed countries," Danev thinks.

According to him, the separation of the social and the pension systems is mandatory, as their current union is unacceptable for any country. The economist expressed his opinion that Bulgaria should attract investments that will help open new jobs and give a push to the economy.

Danev cited data, showing that in 2012, USD 100 M more has been transferred abroad, which, he says, indicates the investors are redirecting their interest outside the country, as Bulgaria's business climate is unstable.

He recalled the black statistics, published by a Swiss institute last week, according to which Bulgaria has tumbled from 38th to 57th place of competitiveness in the last three years.