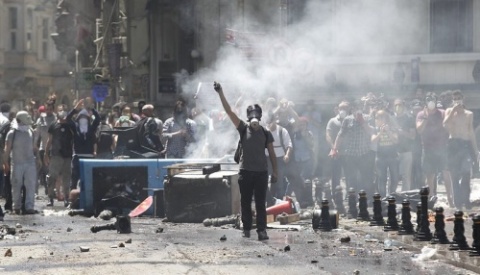 Turkish citizens protest police brutality and the rule of PM Recep Tayyip Erdogan in tens of thousand strong rallies that gripped the country.

The focal point of the protest rallies in Istanbul has moved overnight from Taksim to the Besiktas district, where the Istanbul offices of Turkish PM Recep Tayyip Erdogan are located.

There, Turkish protesters clashed with police in some of the worst violence since unrest erupted three days ago.

The BBC reports that mosques, shops and a university have been turned into makeshift hospitals to deal with the injured.

Thousands of people gathered overnight outside the recently decommissioned Besiktas football stadium and the PM's office.

Bulgaria's bTV's correspondent in Istanbul reports that gas bullets and grenades have been fired directly at people.

Some of the protesters were coughing violently and vomiting after police fired gas canisters into the crowd.

According to bTV, police have sealed off roads surrounding Erdogan's office in a bid to push back protesters, and have closed the bridges connecting the European and the Asian part of the city in a bid to prevent the movement of large crowds.

What has begun as a rally for the preservation of a city park - Gezi in Istanbul's Taxim - has turned into a nationwide rally against the allegedly autocratic and Islamist-leaning regime of PM Erdogan.

Officials say more than 1 700 people had been arrested during protests in 67 towns and cities, though many have since been released. According to the Turkish Doctors' Association, 484 protesters have been treated in hospitals in Istanbul since Friday.

Turkish authorities firmly deny reports that 2 people have died in the unrest.

Turkish Interior Minister Muammer Guler has rejected the report as well. He says 4 of the injured are in critical condition.

According to unconfirmed reports over 1 000 have been injured in Istanbul and several hundred in Ankara.

Unrest was also reported in the capital, Ankara, and protests took place in dozens of other towns and cities.

According to the BBC and bTV, many of the protesters in Istanbul appear to be young, urban middle class, and irritated at what they see as Erdogan's move towards Islamisation.

Erdogan insists the protesters are undemocratic and were being provoked by the opposition Republican People's Party (CHP).

Speaking in a televised interview Sunday, he labeled the demonstrators "a few looters" and strongly criticized social networks, singling out Twitter, which he said was "an extreme version of lying and a menace to society." Twitter and Facebook are down in many sections of Istanbul.

Initially, the protest was largely peaceful.

It was triggered by plans to demolish the only remaining park in Taksim to make way for the rebuilding of an Ottoman era military barracks to house a large shopping center.

But after police used tear gas and water cannon to disperse demonstrators, the tensions escalated.

At the weekend, tens of thousands of people took to the streets in towns and cities calling on the government to resign.

Erdogan now says a mosque not a mall will be built in the square.