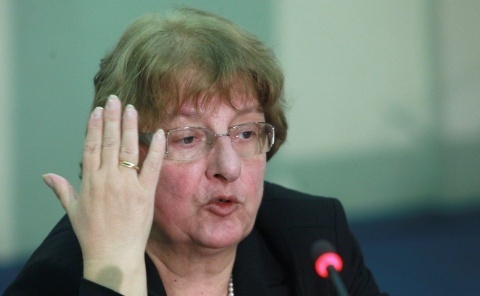 Evgenia Haritonova, Chair of the State Commission for Energy and Water Regulation (DKEVR), photo by BGNES

Electricity bills in Bulgaria will be frozen at least until September 1, the Chair of the State Commission of Energy and Water Regulation (DKEVR), Evgenia Haritonova, announced Friday.

She stated the amendments to the Energy and Renewable Energy Sources Acts could be effective as early as October, but this will depend on the speed they would be prepared and then passed in the Parliament.

When asked what she expected the exact increase to be, Haritonova said she hoped it would be zero.

Several days ago, the DKEVR Chair explained an increase, albeit minimal, could not be ruled out.

The law amendments that aim to redistribute the energy cost so that  the burden does not fall upon citizens, have been formed after the World Bank analyzed the weak points of the Bulgarian energy sector.

According to the current law, the energy price is set once a year and is enacted from 1 July, remaining in power for the next 12 months.

At the end of May, DKEVR usually presents its own proposal of energy prices formation for mines, heat power stations, nuclear power plants, renewable energy sources, the National Energy Company, the energy system operator and the energy distributors - the Czech CEZ, the Austrian EVN and Energo-Pro.

DKEVR estimated that its proposal will raise the energy price with 40%, but after reexamination by the commission the number fell to 16 %.

The green energy costing BGN 1.2 B to the energy system; the National Energy Company, NEK, obligation to buy energy from renewable sources, and the exit of firms form the system, which will have find energy suppliers on their own from 1 July, will affect the energy price formation for the final consumers.