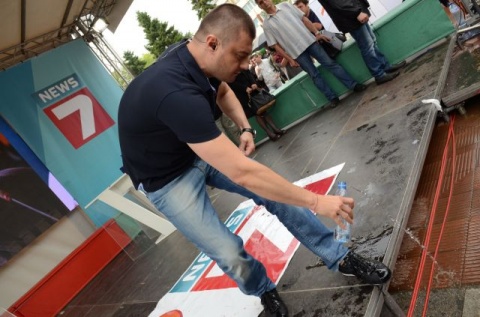 TV host, Nikolay Barekov, attempts to clean himself after becoming victim of a repulsive attack. Photo by BGNES

Two Roma have thrown bags filled with feces at Bulgarian TV7 director and host Nikolay Barekov Thursday evening, during his live broadcast from the northwestern city of Montana.

The nauseating incident was reported by the BGNES news agency.

Bulgaria's national flag, waived by spectators, was also desecrated during the attack.

On reflection day – the day before the elections, when political propaganda is banned, Nikolay Barekov was the one to break the story about 350 000 illegal ballots discovered inside a printing house, suspected to be used to manipulate the May 12 early vote.

Barekov claimed then the ballots were to be used by the formerly-ruling Citizens for European Development of Bulgaria party, GERB, to twist the vote results as the printing house in the town of Kostinbrod, near Sofia, was owned by a GERB municipal councilor.

Back in February, the journalist, who during the entire GERB term was criticized, and even ridiculed, for blindly supporting its government ministers and its leader, former Prime Minister, Boyko Borisov, suddenly turned into their archenemy after Borisov announced he was resigning.

Speaking from the central square in Montana Thursday evening, Barekov labeled the incident a "monstrous provocation."

He accused Borisov, his Deputy and former Interior Minister, Tsvetan Tsvetanov, and key GERB figure, Iskra Fidosova, who was elected Member of the Parliament twice on the Montana ballot, of masterminding the attack and paying the Roma BGN 300 each to stage it.

"We asked the police to provide security as we now expect anything, but they failed to interfere. Desecrating the national colors is a crime. The prosecution must probe this crime and those behind it must go to jail," said the TV host.

The police have arrested the perpetrators.