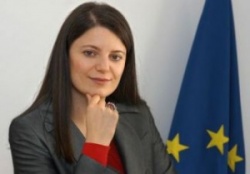 The former Deputy Minister of Administration in the Three-Way Coalition Cabinet (2005 – 2009), Mariya Divizieva, will be the Chief of Staff of Bulgaria's new Prime Minister, Plamen Oresharski.

The information was reported Tuesday by Standard daily, citing their own sources.

Since 2009, Divizieva worked as manager of an investment company, together with her former boss, the Minister of the Administration in the same Cabinet, Nikolay Vassilev.

She has also worked as Parliamentary Secretary of the Ministry of Economy (2001 – 2003) and of the Ministry of Transport (2003 – 2005) in the Cabinet of former Tsar, Simeon Saxe-Coburg, and his National Movement for Stability and Prosperity party, NMSP.

On a personal note, Divizieva lives with new Culture Minister in the Cabinet "Oresharski," Petar Stoyanovich, and they expect their first child in August, according to people close to them, cited by Standard.

The new Bulgarian Cabinet with the mandate of the Bulgarian Socialist Party, BSP and former Finance Minister, Plamen Oresharski, as Prime Minister was approved in the Parliament and took the oath of office Wednesday.