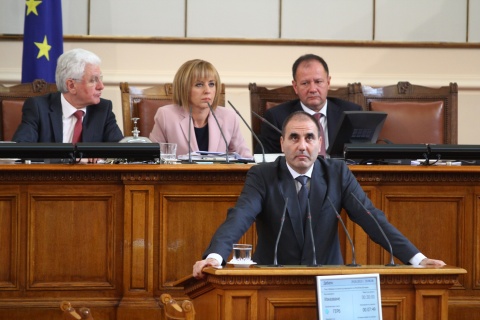 Tsvetan Tsvetanov, Deputy Chair of center-right party Citizens for European Development of Bulgaria (GERB), and former Interior Minister has said that it is clear who calls the shots in the future government – socialist leader Sergey Stanishev and his wife Monika Yosifova, Lyutvi Mestan, Chair of the ethnic Turkish party Movement for Rights and Freedoms (DPS) and DPS MP Delyan Peevski, and nationalist leader Volen Siderov.

Speaking Wednesday during the parliamentary debate on the forthcoming vote on the proposed government panel headed by Prime Minister Plamen Oresharski, Tsvetanov noted that Siderov had demonstrated his support for the "three-way coalition."

The Deputy Chair of GERB, as cited by the Focus news agency, reminded that the socialist-led three-way coalition government (2005 – 2009) had contracted a mere 18% of EU funds provided under operational programs, compared to 103% of contracted EU funds during the term in office of the GERB government.

He further attacked Delyan Peevski, MP from the ethnic Turkish party Movement for Rights and Freedoms (DPS), claiming that collusions with the prosecuting authority had helped DPS come to power.

Peevski, in turn, urged Tsvetanov to not go in hiding during the parliament vote on the Oresharski cabinet.

"It is yet to become clear which persons from the criminal world you have met. This I can promise you. You will be handled by law enforcement institutions. The number of crimes you committed will be revealed," Peevski stated in Parliament.

Delyan Peevski, son of controversial media mogul and former lottery head Irena Krasteva, entered Bulgaria's parliament after his successful performance in the general elections on July 5, 2009 on the ticket of the ethnic Turkish party.