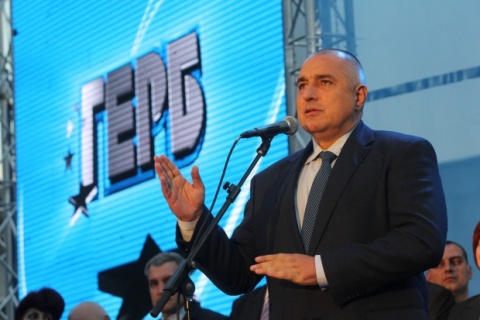 The parliamentary group of Bulgaria's formerly-ruling center-right Citizens for European Development of Bulgaria, GERB, party, will be in plenary hall Wednesday, but would not register to vote on the proposal for new Cabinet.

The information was reported by GERB leader and former Bulgarian Prime Minister, Boyko Borisov, after the group's meeting on Tuesday.

The Cabinet team is tabled by former Finance Minister, Plamen Oresharski, who was nominated for Prime Minister by the Bulgarians Socialist Party, BSP.

The list of Ministers was revealed Monday and will be voted by the Parliament Wednesday morning.

In addition to GERB, the parties that overcame the 4% threshold to win seats in the May 12 general elections are: the Bulgarian Socialist Party, BSP, the ethnic Turkish party Movement for Rights and Freedoms, DPS, and their self-proclaimed arch enemies – the far-right nationalist Ataka (Attack).

According to the final count, DPS and BSP together have 120 seats in the 240-seat unicameral Parliament. Ataka, with 23 MPs, is said to be the kingmaker as GERB has 97 MPs.

GERB narrowly won the election, but was unable to form a government, because Ataka, BSP and DPS all declared that they would not negotiate with or support the former rulers.

The above, together with Borisov's Tuesday announcement about the boycott, means that if Ataka MPs pass on the vote as well, the required 121 MPs quorum to elect the government would not materialize and a stalemate would be reached.

The GERB leader, however, stresses that once elected, they would support any "reasonable move" of the "Oresharski" Cabinet.

It was announced meanwhile that the Ataka parliamentary group is convening Tuesday evening to decide on how to vote on the proposal for the country's new Cabinet as it has not yet decided if it would support the proposed team.

During the Parliament opening ceremony, Ataka leader, Volen Siderov delivered a speech that stunned many with its tone and threats. Among many things, he shouted he would support no one in the Parliament.

At the ceremony, Ataka MPs took the oath of office, but did not register to vote. This lowered the quorum and allowed the BSP Speaker of the Parliament nominee to be elected without obstructions by the Socialists and the ethnic Turks, confirming fears the Nationalists will be the parliamentary brokers.

GERB did not vote for the Speaker's nomination.