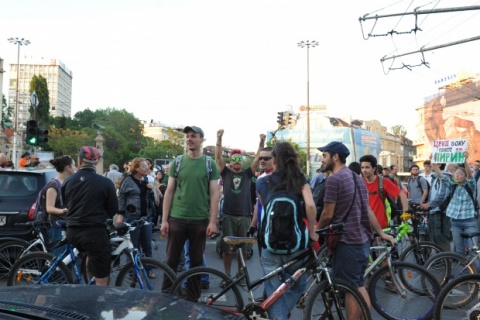 Photo from the June 2012 Orlov Most protest blockades. BGNES

A protest has been called for Tuesday evening on Facebook in central Sofia over alleged "mafia" ties of persons nominated for ministers by Bulgarian PM hopeful Plamen Oresharski Monday.

The protest event, scheduled for 7 pm at the iconic Orlov Most intersection, has already attracted 2,200 participants.

The rally is organized under the slogan "We don't want people from the mafiai to become ministers in our country!"

The persons that organizers most object against are claimed to have ties with companies that have engaged in development in defiance of Bulgaria's environmental regulations.

The most controversial candidacy, that of architect Kalin Tiholov for the new position of Minister for Investment Planning, has already been retracted by Oresharski.

However, the investigative site Bivol.bg has published infromation showing links of his replacement, Ivan Danov, to a constroversial company that engaged in EU funds draining after 2006.

Kalin Tiholov has been implicated in a recent controversy with illegal construction near Nessebar on the Black Sea coast, as well as in a past controversial change of the development plan for the Black Sea Tsarevo municipality.

In June 2012, Orlov Most became famous for numerous rallies directed against development appetites by Vitosha Ski and against controversial amendments in Bulgaria's Forestry Act.

Another candidate that ralliers are going out against Tuesday is Varna Port head Danail Papazov, tipped for Transport Minister, who is alleged to have ties with notorious business group TIM.

Plamen Oresharski's cabinet proposal, formulated on a mandate held by the Bulgarian Socialist Party, is to be voted at a parliament plenary sitting Wednesday morning.