Burgas Terror Act Victims Monument to Be Erected in Bulgaria 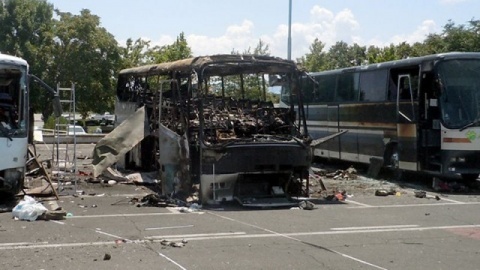 The Burgas bus bombing killed a total of five Israeli tourists, the Bulgarian bus driver, and the alleged perpetrator of the attack. Photo by BGNES

A monument, honoring the perished Israeli tourists and their Bulgarian driver, will be erected at the Burgas airport, exactly one year after the terror act.

On July 18, 2012, Bulgaria's Black Sea city of Burgas became a target for a terrorist attack.

The bus explosion at the Sarafovo airport killed a total of five Israeli tourists, (including one pregnant woman), the Bulgarian bus driver, and the alleged perpetrator of the attack.

The idea belongs to the relatives and friends of the victims. They have already purchased plane tickers to arrive in Bulgaria and attend the unveiling ceremony on July 18, 2013.

The money has been collected through donations, while the Mayor for Burgas, Dimitar Nikolov, has provided assistance for the realization of the project.

Representatives of the Bulgarian and Israeli Cabinets will attend the ceremony as well.

On February 5, 2013, following a meeting of the Consultative Council for National Security at the President's Office, then-Interior Minister Tsvetan Tsvetanov made a statement, saying that the investigating authorities had gathered evidence pointing to a "reasonable assumption" about the involvement of Hezbollah's military wing in the Burgas bus bombing.

Recently, German Foreign Minister Guido Westerwelle expressed his support for the UK, the Netherlands and other EU members in the efforts to blacklist Hezbollah's military wing.