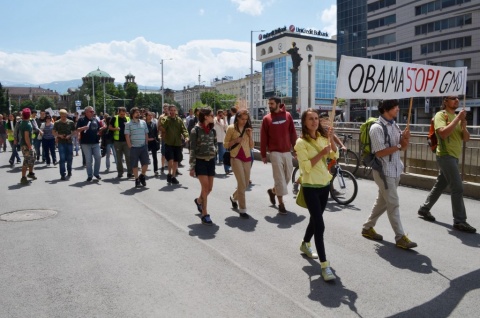 Rallies against genetically modified organisms were held Saturday in Bulgarian capital Sofia and in the city of Veliko Tarnovo, as part of a global day of protests.

The worldwide rallies are carried out under the Global March Against Monsanto banner, targeting US giant Monsanto, which has a huge share of the global GMO market.

Scores of ralliers gathered in the two cities, requesting stronger protection against what they see as a highly environmentally hazardous commercial practice.

GMOs are banned with a law from being grown in Bulgaria, but activists wanted further regulation such as explicit labelling of GMO-containing foods and a strict monitoring of compliance with the ban.

Some 2 M people in over 55 countries around the world are estimated to have participated in the so-called Global March Against Monsanto Saturday.