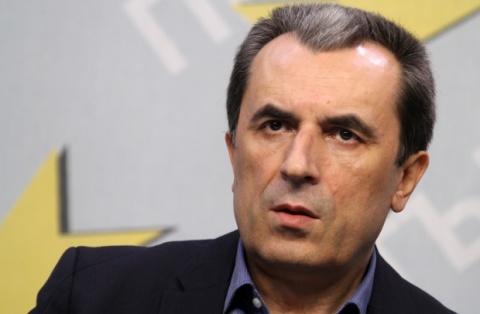 Plamen Oresharski, a non-partisan former Finance Minister, who has been endorsed for PM by BSP. Photo by BSP

The mandate was handed to Plamen Oresharski, a non-partisan former Finance Minister, who has been endorsed for PM by BSP leader and PES president Sergey Stanishev.

Oresharski is yet to reveal the names of his future ministers. His government is expected to be backed in Parliament by BSP and the predominantly ethnic Turkish Movement for Rights and Freedoms.

The nationalist Ataka (Attack) has declared that it would not support a government proposed by any of the three other parties in Parliament.

BSP and DPS have a total of 120 seats in the 240-seat single chamber Parliament. Ataka and the center-right GERB have the same amount of seats.

The 23 elected MPs from Ataka purposely failed to register for voting during the Parliament's first session on Monday, thus lowering the needed quorum from 121 to 109, which allowed BSP and DPS to elect the new Speaker of the Parliament without the need of support from GERB and Ataka.

Bulgaria’s formerly ruling center-right GERB party, which gained most votes in the recent elections, but not enough to form a cabinet, returned the mandate immediately.