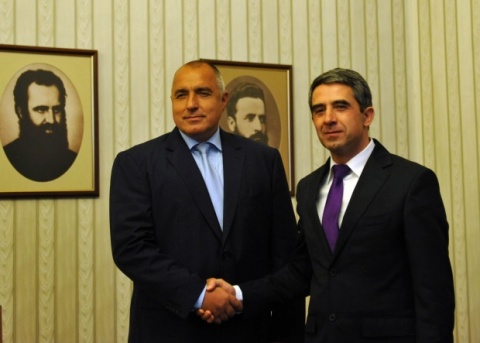 Plevneliev said he was giving the mandate to the Citizens for European Development of Bulgaria party, GERB, under article 99, paragraph 1 of the Constitution which postulates it has to be offered first to the largest parliamentary political group.

"Bulgarian voters made us the largest group in the Parliament. We promised them to not enter any senseless coalitions," said Borisov and proceeded to fulfill his promise in announcing his nominations for ministers and then returning the mandate back to Plevneliev.

He stated he was ashamed from the ethnic Turkish party Movement for Rights and Freedoms, DPS, and the left-wing Bulgarian Socialist Party, BSP, and their respective leaders, Lyutvi Mestan and Sergey Stanishev, as they were getting ready to collaborate with xenophobic and anti-EU far-right nationalist Ataka.

"I was ready to give them the one needed MP vote to be able to form a government, but this alliance with Ataka embarrasses us before Europe. This fresh Three-Way Coalition will turn into a deadly tumor," the former PM said and returned the mandate to the President.

Below is the list of ministers nominated by Borisov:

Borisov arrived earlier at the building of the presidential administration alone.