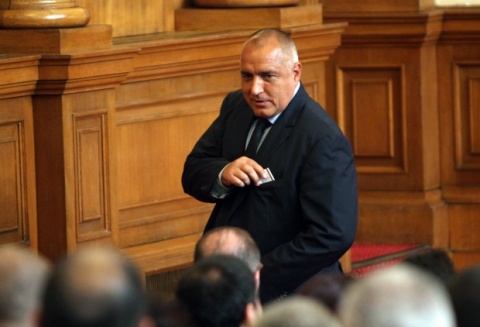 Bulgaria’s former Prime Minister and GERB leader Boyko Borisov announced on Wednesday that his party’s proposal for a cabinet will not be tabled in the Parliament. Photo by BGNES

Bulgaria’s formerly ruling center-right party, which gained most votes in the recent elections, but not enough to form a cabinet, is expected to return immediately the mandate.

A day earlier ex-Prime Minister and GERB leader, Boyko Borisov announced that his party’s proposal for a cabinet will not be tabled in the Parliament.

Borisov made the announcement in the Parliament Wednesday, where he was attending the first working sitting in his capacity of elected MP.

He said he would accept the mandate Thursday from President, Rosen Plevneliev, will announce the ministerial nominations on the spot, and will then return it, so that no time is wasted in appointing a government needed the stabilize the country.

"We will save at least half hour with this. I will not table the nominations in the Parliament as the new Three-Way Coalition is now obvious – it will reject the proposal so it means wasting time," Borisov told journalists.

The parties that overcame the 4% threshold to win seats in the May 12 general elections are: GERB, the Bulgarian Socialist Party, BSP, the ethnic Turkish party Movement for Rights and Freedoms, DPS, and their self-proclaimed arch enemies - the far-right nationalist Ataka (Attack).

According to the final count, DPS and BSP together have 120 seats in the 240-seat unicameral Parliament. Ataka, with 23 MPs, is expected to be the kingmaker as GERB has 97 MPs.

Ataka, BSP and DPS have all declared that they would not negotiate with GERB, which narrowly won the election, but will be unable to form a government.

As the Constitution requires, the President must first offer the mandate to the largest party in the Parliament.

If GERB fails to appoint a government within a 7-day deadline (for which Borisov said he would not wait), then the mandate goes to the second largest party – BSP. If the Socialists fail or refuse to form a Cabinet – the mandate will be given to DPS, and then – to the fourth and last formation to win seats in Bulgaria's 42nd General Assembly – Ataka.

If none of the four succeeds to form a government, the President has to appoint a caretaker government, and, with one single decree, adjourn the Parliament and schedule new general lections within 2 months of dissolving the Parliament.