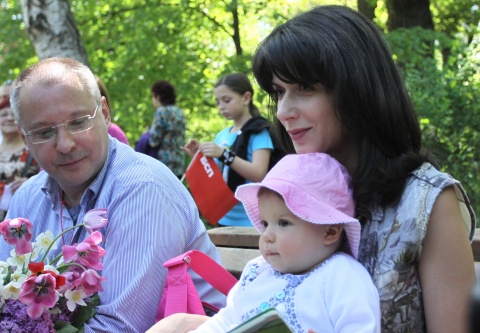 The leader of the European Socialists, Bulgarian Socialists and former Prime Minister Sergey Stanishev, tied the knot with girlfriend Monika Yanova on Sunday, exactly a week after the May 12 snap general elections.

The news was reported by the Bulgarian Dnevnik daily, citing own insiders.

The couple exchanged their vows at Sofia church Saint Sofia, according to the report.

Apart from the newlyweds, the ceremony was attended only by the godfather and godmother and a photographer.

The couple already has a daughter, Daria, and is expecting a son in July. Daria (meaning gift) was born on May 1, 2011, celebrated by the Socialists as Labor Day.

The Socialist leader had initially planned to marry Monika in the spring, but the early elections have forced him to move the date, he admitted in a TV interview.

They couple has first shared their decision with Monika's two other children from a previous marriage to banker Ventsislav Yosifov.