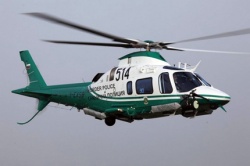 Photo by the Bulgarian Ministry of Interior.

The migrants managed to call 112 and alert the authorities, after losing their way and apparently spending 3 days and nights in a hard-access area in the Sakar mountain.

43 border police officers were mobilized, but after failing to localize the migrants, a helicopter flew in to monitor the area.

The 11 asylum seekers were fond at an improvised campsite in the mountainous area near the village of Kraynovo, Yambol region.

The 8 men, 1 woman and 2 young children were discovered exhausted and dehydrated.

Police officers managed to carry them back through the forested area, with no roads and trails availale.

Part of the migrants were determined to originate from Syria and Morocco.

According to their report, they were left by a Turkish trafficker along the border and told that if they go on, they will reach the Kapitan Andreevo crossing point.

The trafficker had however apparently stranded them some 100 km away from the checkpoint.

Later Saturday near the village of Kraynovo, police found another group of 3 men, 1 woman and 4 kids coming from Iraq and Afghanistan.