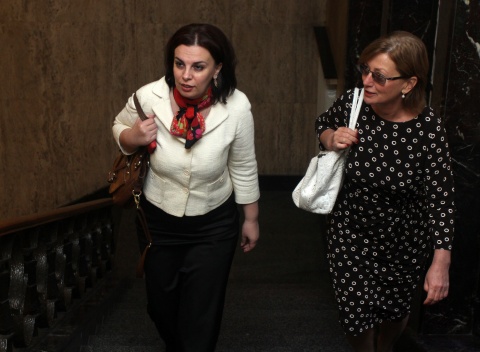 Thursday’s sitting on the appeal of the disciplinary dismissal of Miroslava Todorova (L) will be attended by international observers and representatives of international NGOs. Photo by BGNES

A five-judge panel of the Supreme Administrative Court (VAS) will review Thursday morning the appeal of former Chair of the Bulgarian Judges Association (BJA), Miroslava Todorova, against her disciplinary dismissal by the Supreme Judicial Council (VSS).

On January 5, 2013, a three-judge panel of VAS revoked Todorova's appeal, thereby confirming her dismissal over the unreasonable delay of proceedings.

Sofia City Court judge Todorova was dismissed in July 2012 by the Supreme Judicial Council over delayed submission of written motives to cases she presided over.

Todorova's disciplinary dismissal was upheld by the Supreme Administrative Court in end-July.

On November 23, Todorova was dismissed from the post of BJA Chair.

Todorova is currently appealing the acquittal of Interior Minister Tsvetan Tsvetanov in a high-profile libel trial.

On October 18, the Plovdiv Regional Court acquitted Tsvetanov in the libel case initiated by Todorova over two consecutive interviews of the Interior Minister in which he accused her of incompetence and of patronizing organized crime because of the delayed presentation of the written motives to an eight-year jail sentence handed down to drug lord Vasil Manikatov.

The acquittal is being appealed at the Plovdiv District Court, according to reports of Sega daily.

Todorova's dismissal triggered criticism from the European Commission and a wave of protests of Bulgarian judges.

Thursday's sitting of the five-judge panel of VAS will be attended by international observers and representatives of international NGOs.

The sitting will be attended by representatives of the American Bar Association, who described Todorova's dismissal "an emblematic case of a judge being put under pressure through the politicization of the disciplinary system" at a special press conference on Wednesday.

The ABA argued that Todorova's dismissal was disproportionate and that it appeared a politically motivated.

The ABA claimed that Todorova had been used as a scapegoat and her dismissal had been aimed at alleviating criticism against the political power and VSS.