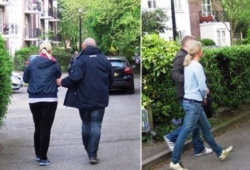 London police has smashed a suspected Russian mafia gang that ran a prostitution and trafficking racket from an apartment block in west London, local media reported.

Following the raids the nine women, who were from Russia, Bulgaria and Latvia, were taken to a care centre to receive support, according to London Evening Standard.

Detectives swooped on 13 addresses in dawn raids and rescued nine women they say were trafficked into the UK and forced into prostitution by the gang.

Six people were arrested - including four Russian nationals - after raids at luxury addresses in west London including Chelsea Harbour and a gated estate behind Stamford Bridge football ground.

They say the gang ran a highly organised and complex network of brothels along the lines of a business, complete with enforcers and an accountant.

Women were ‘recruited’ from Eastern Europe and promised jobs in the leisure industry in London working in posts such as receptionists at hotels.

But once in the UK they were forced to work as prostitutes with the threat that their families would be targeted if they refused.

At the centre of the business was a block of nine flats in Warwick Road which the group rented and operated as a brothel.

Each of the flats was occupied by a woman who was forced to work for the gang.

Police estimate the block of flats could generate up to ?20,000 a day in earnings.

Detectives seized ?75,000 in cash today from two of the suspects’s addresses.

The suspected ringleader was a 44-year-old Russian woman who was arrested at an address on the luxury Brompton Park Crescent estate in Chelsea.

Detective Inspector Kevin Hyland, of the Human Trafficking and Prostitution Unit, said: “Today we have targeted an organised group of criminals who have been profiting from the abuse of scores of women.

“This operation is in part a result of victims having the courage to come forward about the abuse they are suffering. I urge other victims of trafficking to phone our hotline where we have translators and specially trained staff awaiting their call. ”

He added: “This was organised and run on the lines of a business with elements that arranged the recruitment in eastern Europe, the advertising and the website and the accounting.”

Three of the Russian nationals were in the UK illegally.

A sixth person - a 37 year-old man from Beckton  - was also arrested in Essex.

All are currently in custody at a west London police station.