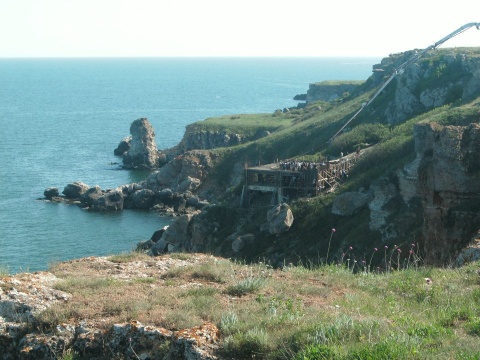 Municipal authorities have ordered a temporary stop of work on a construction site in the area of a protected archaeology site along Bulgaria's Black Sea coast.

The ongoing rapid construction was apparently started just ahead of Sunday's early general elections in Bulgaria, and raised among an outcry among environmentalists and the general public.

The site appears to fall within the area of the Yaylata National Archaeological Reserve, located in a scenic area near the village of Kamen Bryag.

Monday Bulgaria's Ministry of Environment announced it has found that the ongoing construction does not comply with the construction permit issued.

The permit refers to "Reconstruction of a roof and masonry of a fisherman's hut," while builders have already erected two stories of a massive concrete building.

It remains to be seen whether the permit itself has been properly issued, say environmentalists.

There are reports that the borders of the archaeological reserve have been corrected on purpose to leave the site out of them.

All the same, the construction is highly questionable, as Bulgaria's coastline lands are exclusive state property, according to Bulgaria's Constitution.

Tuesday local authorities in the town of Kavarna announced that they have ordered a halting to all work at the site, until facts have been ascertained.

The roles played by the Kavarna Municipality and the regional Varna environmental and construction inspection agencies in granting the controversial permit is to be determined.

Proclaimed a National Archaeological Reserve in 1989, Yaylata is home to over 100 cave dwellings from around 4,000 BC, as well as remnants from a Thracian settlement and a Byzantine fortress. It also boasts rich seaside habitats and high scenic rocks.