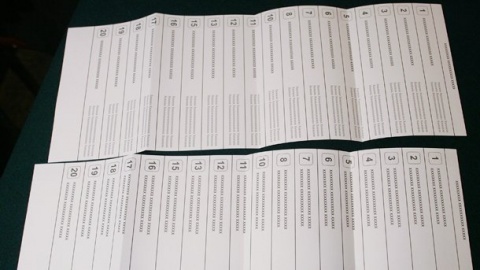 Some 350 000 suspected to be illegal ballots seized Saturday from the Multiprint printing house in the Bulgarian western town of Kostinbrod. Photo by BGNES

Bulgarian prosecutors are expected to hold a briefing Wednesday to reveal what exactly has been found in the now-notorious ballot printing facility near the capital Sofia.

The information was disclosed Tuesday by Nova TV,  in the aftermath of breaking news reported Saturday by TV7 that the Bulgarian Prosecutor's Office is probing the case of some 350 000 suspected to be illegal ballots seized from the Multiprint printing house in the western town of Kostinbrod.

The ballots, allegedly, were to be used to manipulate the vote in the early general elections on Sunday, May 12, to turn the results in favor of the centrist Citizens for European Development of Bulgaria party, GERB.

The printing house is owned by Yordan Bonchev, municipal councilor in Kostinbrod from GERB, who is said to be close to GERB's Deputy Chair and former Interior Minister, Tsvetan Tsvetanov.

The prosecution has so far confirmed that they have indeed found 350 000 ballots produced after May 8, when all regular ballots, ordered under the public tender, were printed and delivered, to be used for the elections. The seized ballots were packed and ready to be transported.

Under the law, each ballot must include the name and the number of the voting region and the names of the first 3 candidates on the ticket of each party.

According to Nova TV, the 350 000 ballots were destined for 10 voting regions.

The prosecution is expected to reveal if the ballots have been blank or if they have been filled in advance for a certain political party.

If the second is proven, the Constitutional Court could ask for a probe in the validity of the elections and they might end up being invalidated.