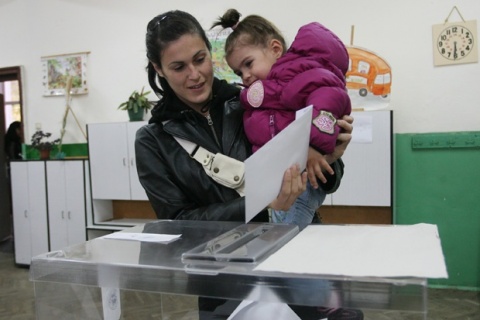 The Austrian company SORA - Institute for Social Research and Consulting, which is doing a parallel vote count in Bulgaria's May 12 early general elections was able to announce its flash results after its site was hacked.

The parallel vote count has conclusively confirmed that four parties will certainly make their way to Bulgaria's 42nd General Assembly after the Sunday early general elections.

The center-right Citizens for European Development of Bulgaria GERB party of former Bulgarian Prime Minister, Boyko Borisov, got 30.4% of the vote, 9% down compared to 2009.

The Bulgarian Socialist Party, BSP, is second with 26.1% (up 8.4%, compared to 2009), the ethnic Turkish party Movement for Rights and Freedoms, DPS has 11.2% a(3% down) and the latter's self-proclaimed archenemies - the far-right nationalist Ataka (Attack) – 7.8% (down 1.6%). Stunningly for many none of the oldest "hardline" right-wing formations are going to be in the next Parliament.

From the right-wing parties, which are credited with throwing out the ex-communists who had pushed the country to the brink of financial crisis in the 90s, only Democrats for Strong Bulgaria, DSB, of former Prime Minister Ivan Kostov is close, garnering 3 % of the vote.

The right-wing Bulgaria for Citizens of former EU Commissioner, Meglena Kuneva is also close to the 4% threshold with 3.2%.

Also as a surprise, the nationalist National Front for Saving Bulgaria has 3.2%.

According to SORA, GERB party won about 96 seats; the Socialist Party will capture as many as 83 MPs in Bulgaria's 240-seat unicameral parliament.

Another 37 seats are expected to go to the ethnic Turkish Movement for Rights and Freedoms, DPS.

The nationalist Ataka party ranked fourth, capitalizing on anger at corruption and poor living standards and has tapped on ethnic debate. It is expected to secure 24 MP seats.

Last week, the Bulgarian Socialist Party, liberal Movement for Rights and Freedoms, nationalists Ataka, rightists Democrats for Strong Bulgaria, and new party Bulgaria for Citizens signed the official agreement for the parallel counting of the vote.

Representatives of the company point out they cannot say at the moment who hacked their site just moments ahead of their scheduled presentation of the results.

They are working on creating a new web address to publish the results later Monday.

Bulgarians voted in early general elections on May 12.