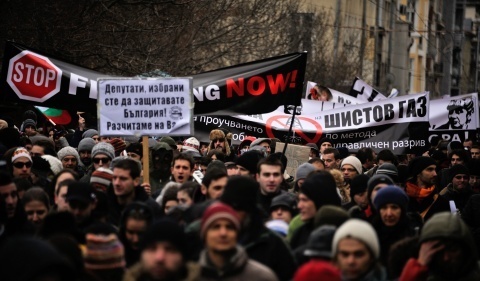 The moratorium on shale gas development in Bulgaria was adopted after a mass rally staged in January 2012 in Sofia. Photo by BGNES

Bulgarians in the northeastern city of Dobrich are going to stage a new wave of protest rallies against the use of the hydraulic fracturing technology in neighboring Romania.

The organizers, quoted by Standard daily, say they are going to revolt against big money and for protecting nature.

One of them, Sintiya Nedyalkova, states she is going to dedicate her entire life to the full moratorium on shale gas exploration and exploitation as it would be detrimental to the Dobrudhza region.

The permits to explore shale gas deposits using the hydraulic fracturing (fracking) technology have been granted for the Constanta municipality – the blocks of Costinesti and Vama Veche, according the Romanian Environment Ministry.

The permits give green light to Chevron to conduct controlled explosions at a depth of 10 and 15 meters on an area of 1 800 square kilometers.

The fracking technology is a thorny issue in many countries, including the US, and has been banned in some.

Bulgarians, particularly those in Southern Dobrudza, have harbored fears that if the Romanian moratorium is lifted, the technology will for sure affect Bulgarian regions close to the Bulgarian-Romanian border and will destroy the soil, poison the waters, and depopulate the region.

The village of Vama Veche is right on the Bulgarian-Romanian border.

Dobrich has seen a number of protests already against shale gas exploration, both in Romania and Bulgaria