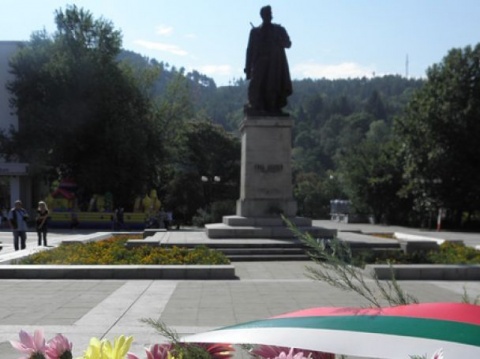 The monument of national hero Gotse Delchev in the southwestern Bulgarian city of Blagoevgrad. Photo by BGNES

Bulgarians all over the country are honoring Saturday, May 4, the 110th anniversary since the death of the Bulgarian revolutionary hero from Macedonia Gotse Delchev.

The official ceremony was held in the southwestern city of Blagoevgrad before the hero's monument.

The anniversary was marked in neighboring Macedonia as well. The ceremony and the memorial service at the Sveti Spas church in Skopje where Delchev is buried was attended by senior officials and many citizens.

One of the founders and the ideologists of VMRO, Delchev is among the most significant revolutionaries, revered as national hero in both Bulgaria and Macedonia.

Delchev quickly became one of the leaders of the VMRO, the organization seeking to liberate the Macedonian and Adrianople Region Bulgarians from the Ottoman Empire, in its most successful period - 1894-1903.

Gotse Delchev was killed in 1903 close to village of Banitsa, present-day Greece, as his regiment of rebels skirmished with Ottoman Turkish troops, three months before the Ilinden-Preobrazhenie Uprising of 1903.

One of the most important books on Gotse Delchev, "Freedom or Death, the Life of Gotse Delchev", was written by the British historian Mercia MacDermott.