Jerusalem Holy Fire to Arrive in Bulgaria on Holy Saturday 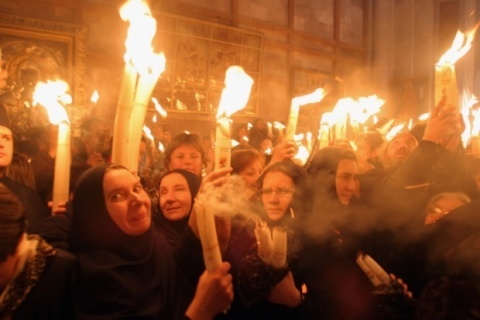 The Holy Fire, which is ignited every year at the Church of the Holy Sepulchre in Jerusalem, will be brought to Bulgaria around 7 pm on Holy Saturday.

The official clergy delegation is headed by Plovdiv metropolitan bishop Nikolay, who was elected to deliver the Holy Fire by the Holy Synod on March 5.

This time around, the flame will be brought on a private plane, instead of the government one. The funds have been donated by members of the Plovdiv Bishopric. The plane will land at the Plovdiv airport.

The Plovdiv Regional Governor, Zdravko Dimitrov, and the main sponsor of the trip, Ivan Mihaylov, are also included in the delegation.

The annual Easter rite draws thousands of Christian pilgrims to the Church of the Holy Sepulcher.

The alleged miracle is key in Eastern Orthodox and Armenian Apostolic Christian beliefs, and occurs each year on Holy Saturday, the Saturday before Easter.

The fire mysteriously ignites behind the altar of the Holy Sepulchre church, built at the site where Jesus Christ was buried and was resurrected on Easter.

During the annual ceremony, top clerics enter the Edicule, the small chamber marking the site of Jesus' tomb. They emerge after some time to reveal candles lit with "holy fire" — said to be miraculously lit as a message to the faithful from heaven. The details of the flame's source are a closely guarded secret.

Believers are allowed to touch it and venerate the fire, which is said to not burn them.

The Holy Fire is then transported via special flights to Christian Orthodox countries across the world, including Bulgaria, to be ignited in local churches for Easter.