President in US: Bulgaria Must Implement Own Reforms 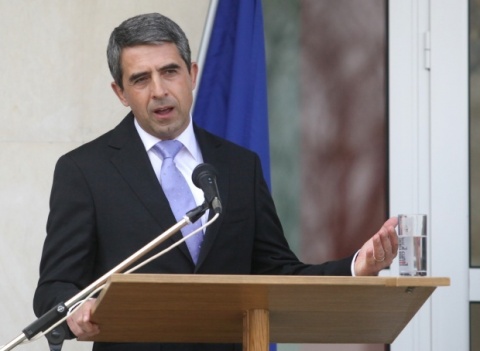 Bulgaria's President Rosen Plevneliev is on a working visit to Washington DC. Photo by BGNES

Bulgaria and all other EU Member States must implement their own reforms for economic growth and employment instead of waiting on Brussels to do it for them, says President Rosen Plevneliev.

Plevneliev spoke at a discussion organized by the European Institute in Washington DC.

Before an audience of diplomats, businessmen and researchers, the President presented his vision for the needed economic growth policies as Bulgaria is on the verge of finalizing the National Strategy Bulgaria 2020, which will become the foundation for the partnership contract with the European Commission for the next program period.

According to Plevneliev, income must be earned and not secured through loans. He explained the country offers opportunities for advancement, particularly in the sectors of farming, food processing and high-technologies.

Plevneliev also met with the President of the World Bank, Jim Yong Kim, in the Bank's headquarters in Washington.

Both joined around the opinion that the partnership between Bulgaria and the World Bank has entered a new stage with the financial institution working with local experts and the country's administration to improve management of large projects and implement key reforms.

They outlined as priorities for partnership healthcare, education, the energy sector, and energy efficiency.

Wednesday evening, Plevneliev spoke before the participants of the forum, titled Transatlantic Bond in the New Era, which was organized by the Institute for Cultural Diplomacy, the John Hopkins School of Advanced International Studies, and the German Fund Marshall of the US.

Two former US ambassadors to Bulgaria, James Pardew and James Warlick were in attendance.

While in Washington, Plevneliev attended the celebration of the 100th anniversary of the Anti-Defamation League, one of the most significant organizations of the Jewish community in the US.

The celebration took place Tuesday at a gala dinner in the presence of representatives of the White House, the US Congress, NGOs and religious communities.

Plevneliev's participation in the event was seen as part of the commemoration of the 70th anniversary of the rescue of Bulgarian Jews in World War II.