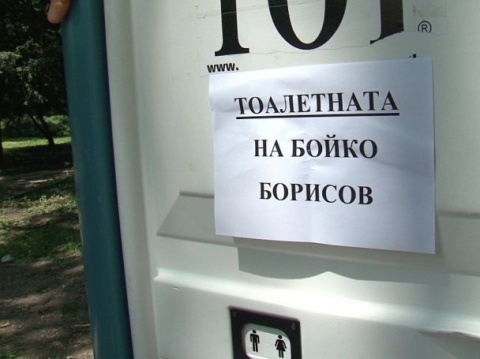 "Boyko Borisov's Restroom," reads the inscription on the portable bathroom, decorated with plastic years, in the central Sofia park. Photo by BGNES

Unknown pranksters have "decorated" one of the portable restrooms in the central Sofia park "Borisova gradina," poking fun at the "Watergate" scandal with mass unauthorized spying in the country.

The Bulgarian news agency BGNES reports that the chemical bathroom is decorated with six plastic years and bears a sign proclaiming it belonged to the leader of the Citizens for European Development of Bulgaria party GERB and former PM, Boyko Borisov.

The joke comes on the heels of the growing scandal some have dubbed "Bulgaria's Watergate."

Tsvetanov, who is running for Parliament in May 12 general elections and therefore has immunity, has denied any wrongdoing.

He declared that he was ready to give up his immunity, but only after the upcoming general elections.

Tsvetanov's statement follows the announcement made on Tuesday by the Sofia prosecuting authority that there was sufficient evidence indicating that Tsvetanov had committed a crime.

The Sofia City Prosecutor's Office made clear that Tsvetanov, in his capacity as public official, had consciously allowed his subordinates to engage in illegal wiretapping.

Tsvetanov, who is on a cross-country tour as head of the election headquarters of center-right party GERB, faces a penalty of up to eight years of imprisonment if the prosecuting authority presses charges and succeeds to prove them in court.

In it, one can also hear someone using the bathroom, which provoked Borisov's avalanche of complaints his privacy was gravely violated.