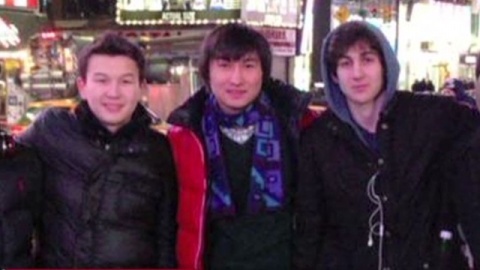 If convicted, the tree college friends of the Boston bombings suspect Dzhokhar Tsarnaev face fines of up to USD 250 000 and from five to eight years of jail time.

They have appeared in court Wednesday on charges of obstructing the police investigation into the attacks.

Robel Phillipos, who is US Citizen, is accused of making false statements to investigators. None of the three are implicated in plotting the attacks.

Three people died and 264 were wounded in the April 15 twin marathon blasts.

Tsarnaev, a 19-year-old student, has been charged over the bombings. His 26-year-old brother, Tamerlan, was killed during a shootout with police.

BBC reports Thursday that according to the affidavit, three days after the blasts, Tazhayakov and Kadyrbayev removed items from the suspect's dorm room at the University of Massachusetts – Dartmouth.

When TV news reports aired photos of the bombing suspects, released by the FBI, Kadyrbayev allegedly texted Dzhokhar Tsarnaev to say that he resembled the suspect.

Tsarnaev's response included the phrases "lol," "you better not text me," and "I'm about to leave if you need something in my room take it."

Kadyrbayev's lawyer is quoted in saying his client did not immediately think that Tsarnaev was the suspect in the FBI images, and that he did not realize the backpack was evidence.

However, the FBI inform Kadyrbayev knew when he saw a backpack containing fireworks which had been opened and emptied of powder that Tsarnaev was involved in the bombings.

The affidavit further says Kadyrbayev told authorities that the three "collectively decided to throw the backpack and fireworks into the trash because they did not want Dzhokhar to get into trouble."

According the FBI, Kadyrbayev also decided to remove the laptop "because he did not want Dzhokhar's roommate to think he was stealing or behaving suspiciously by just taking the backpack.

Kadyrbayev had said he placed the backpack and fireworks along with rubbish from the apartment in a large thrash bag and threw it into a bin near the men's apartment.

Investigators say they later found the backpack in a landfill.

It remains unclear what happened to the laptop.

Tazhayakov and Kadyrbayev have been held in jail for more than a week for allegedly violating their student visas.

University of Massachusetts - Dartmouth said in a statement Wednesday that Tazhayakov had been suspended pending the outcome of the case.

The two other men were not currently enrolled, the university said.

Dzhokhar Tsarnaev, who received gunshot wounds during the police manhunt, faces a possible death sentence if convicted for his alleged role in the bombings.

He remains in a hospital prison.

Tamerlan Tsarnaev's relatives said on Tuesday they would claim his body now that his widow, Katherine Russell, has given consent for the Massachusetts medical examiner to release it, an uncle said.