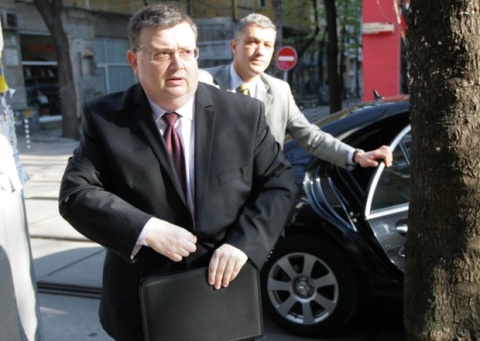 Bulgaria's Chief Prosecutor, Sotir Tsatsarov, stated Monday that he had no doubt that the scandalous tapes leaked to the media Friday are authentic.

In the conversation, the three discuss ways to thwart ongoing proceedings against Naydenov, who has been charged with corruption and abuse of power.

In another highly questionable move, Kokinov is heard revealing to the others yet unpublished details of a prosecution investigation that found massive violations in the use of special surveillance devices under Borisov and his Minister of Interior Tsvetan Tsvetanov.

The VSS Ethic's Commission is holding a sitting to examine Kokinov's resignation and his dealings.

"What is the most troubling for me is that is has emerged that Mr. Kokinov has practically reported the results of my office's probe in the tipoff of mass improper wiretapping in the country ahead of our official briefing, and that he possibly handed the written report from the probe to senior politicians," said Tsatsarov.

He informed that as early as Friday, the Supreme Prosecutor's Office of Cassations has launched an investigation to establish if the recorded conversation includes data of crimes against justice and of abuse of office.

"I have no doubt the tapes are authentic. I don't think anyone in their right mind would deny that such conversation has taken place. We need to establish now if this is the entire conversation, or only pieces of it," the Chief Prosecutor explained.

Commenting on Kokinov saying to Borisov in referring to Tsatsarov: "You handpicked him," he stated:

"I am not worried about it. It would be alarming if I chose to sit and not do anything. We have two options – to do our job or wait for our term in office to expire. I have no intentions to wait and make my office hostage of somebody's interests or, God forbid, a participant in the political games ahead of the upcoming general elections. The prosecution can no longer remain in waiting mode; it must do the job."