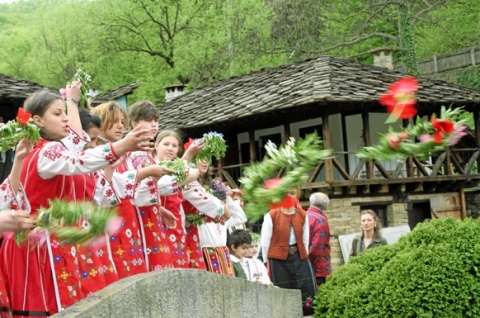 Also known as Lazarus Saturday, the day is always celebrated on the day before Palm Sunday, which in turn is marked on the Sunday before Easter.

It marks the Resurrection of Lazarus of Bethany performed by Jesus Christ and symbolizing the resurrection of Christ himself and the salvation of mankind.

The miracle, done by Jesus four days after Lazarus's death, turned many into believers, but also hastened the pharisees' decision to have Jesus arrested and killed.

The Great Lent is strictest following St. Lazarus Day, and believers are invited to purify themselves and reflect on their faith and their ties to their loved ones and neighbors.

According to Bulgarian folk beliefs, Lazarus Saturday, also called Lazaritsa, is a day on which young girls are initated to become future wives.

In the traditions of old, groups of young women dressed in festive clothes walked the town, singing songs bidding health, prosperity and fertility to households.

On Lazarus Saturday, the Bulgarian Orthodox Church also commemorates St. Lazarus the Bulgarian, who died a martyr's death in 1802.