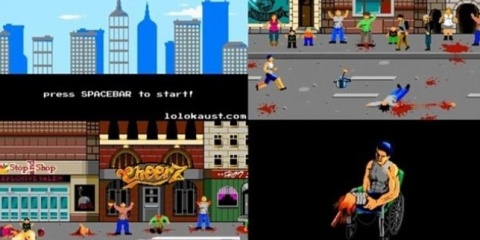 Screenshot scenes from the new video game "The Boston Marathon 2013: Terror on the Streets.

A video game "inspired" by the deadly Boston Marathon bombings has shocked many Americans, the New York Daily News reported.

The game is named "Boston Marathon 2013: Terror on the Streets," and is hosted on inflammatory website Lolokaust.com.

It features people running away from the blasts and other images from the tragedy, including a wheelchair-bound man with his legs blown off.

Players in the new video game escape pressure cooker bombs like the ones used in the Boston attacks.

The man on the wheelchair with blown off legs appears if the player loses, while the winners get congratulations for surviving the Boston Marathon and are told the world was safe again and they could even sleep with President Obama's wife.

The twin Boston Marathon bombings killed 3 people, but the number of the injured has risen to 264 from the previous 170, as more people have checked in the hospitals over persisting problems. Some of the wounded had to have their legs amputated.

CCN reported meanwhile that Nike has pulled T-shirts that read "Boston Massacre" - a reference to the Yankees-Red Sox baseball rivalry - from store shelves in light of the tragedy in Boston last week.