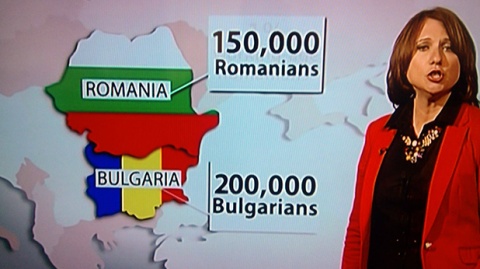 During the debate, a map was displayed picturing Bulgaria’s flag over Romania’s territory – and vice versa.

An embarrassing blunder was made during a BBC Daily Politics show, as Bulgaria and Romania appeared with wrong flags.

During the debate, a map was displayed picturing Bulgaria’s flag over Romania’s territory – and vice versa.

The debate can be seen HERE.

Polls commissioned by the BBC in Bulgaria and Romania recently showed that there is no great likelihood that Britain will be flooded with migrants from the two Balkan countries once work restrictions fall off at the end of 2013.

Controversial claims have been made by a number of British tabloids and politicians that the UK should brace for a massive"influx" of Bulgarian and Romanian migrants after the end of 2013. It has been claimed that lifting the restriction would "put pressure" on housing, infrastructure, schools, and heath care.

Among the main reasons for the "migrant scare" was a perception that Eastern European migrants would simply drain Britain's welfare system.