Bulgaria to Back EU Moratorium on Bee-Harming Neonicotinoids 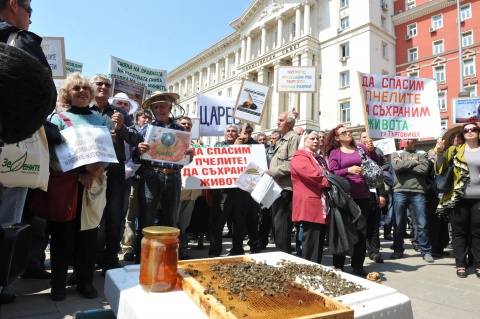 Monday's protest in downtown Sofia brought together over 100 beekeepers from Varna, Tsarevo, Razgrad, Plovdiv and a number of other Bulgarian towns and cities. Photo by BGNES

Bulgaria's caretaker Prime Minister Marin Raykov has vowed that the country will back the ban on the use of bee-harming neonicotinoid pesticides at the vote at the European Commission's Appeal Committee.

Speaking to protesting beekeepers in Sofia, Raykov assured Monday that Bulgaria would adamantly defend its stance in talks with European partners.

Raykov made clear that he had officially signed Bulgaria's stance on the matter on Monday, adding that it would be defended by caretaker Minister of Agriculture and Food Ivan Stankov.

"Both personally speaking and in my capacity of head of the caretaker government, I back your stance and I believe that these pesticides must be banned by all accounts. If we fail to pay attention to the problem with bees today, tomorrow we shall have nothing to eat," he stated.

Monday's protest in downtown Sofia brought together over 100 beekeepers from Varna, Tsarevo, Razgrad, Plovdiv and a number of other Bulgarian towns and cities.

The protesters claimed that 30% of Bulgarian bees had died in 2012 due to the use of neonicotinoid pesticides, stressing that if the current trend remained in place, there would be no bees in two years' time.

Beekeepers demand that Bulgaria back the EU moratorium on neonicotinoids at the vote at the European Parliament, stressing that the abstaining vote of the Bulgarian representative had blocked the adoption of the law.

Beekeepers also called for a national moratorium by the next government of the moratorium was rejected on an EU level.

Some beekeepers also voiced discontent over the lack of state subsidies and the "irresponsible" policy of the government towards bee products.