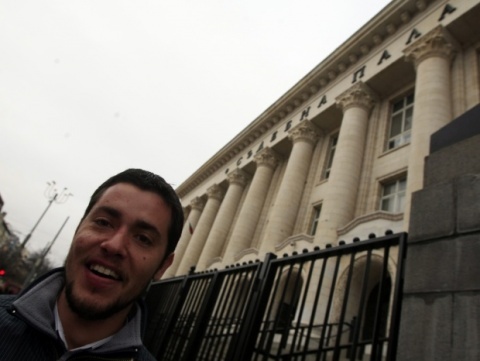 Bulgarian journalist, Boris Mitov, is pictured here at the beginning of April leaving the main courthouse in Sofia without charges of leaking State secrets being pressed against him. Photo by BGNES

“SEEMO is surprised to hear that Bulgarian journalist Boris Mitov, who works for Mediapool, was summoned on 5 April 2013 to the prosecutor's office for questioning over one of his reports. This appears to be a clear-cut case of pressure directed at a journalist,” the organization said in an official statement.

Bulgarian journalist Boris Mitov published earlier this month on the Mediapool site an article titled "The Bulgarian Watergate. And Who Will Probe the Investigators?"

In it, he explains that Deputy Sofia City Prosecutor, Roman Vasilev, as a person known to have committed a number of breaches, was hardly the best choice to probe tipoffs of illegal and mass wiretapping during the term of now-former Interior Minister, Tsvetan Tsvetanov, from the Cabinet of the Citizens for European Development of Bulgaria party, GERB.

Only one hour after the article appeared online, the journalist was summoned on the phone by Dragomir Yanchev, Prosecutor from the Sofia City Prosecutor's Office.

During the questioning, Yanchev has demanded from Mitov to disclose his sources. After receiving a negative answer on grounds the latter violates journalistic ethics, the Prosecutor hinted Mitov could be prosecuted and would face up to 5 years of jail.

Yanchev has firmly denied the above.

Boris Mitov however left on April 8 the Sofia City Prosecutor's Office without legal charges of leaking State secrets pressed against him.

Mitov informed the crowd gathered in his support in front of the main courthouse that he told the prosecutors he did no longer possess the requested documents and they then only asked him to sign a document that he was refusing to reveal his sources and let him go.

He further said the fact he appeared for the questioning with a well-known attorney helped a lot in changing the prosecutor's attitude.