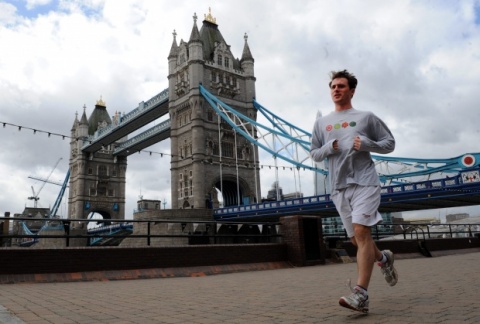 About half a million people will watch the London Marathon race. Photo by EPA/BGNES

The London marathon opened under high security measures and 30 seconds of silence in honor of the Boston bombings' victims.

BBC reports Sunday that hundreds of extra police officers - 40% more than last year - have been drafted in to reassure runners and spectators, though there was no information of imminent threat.

Three people were killed and more than 170 others injured by Monday's twin blasts, close to the finish line of the Boston Marathon in the US.

Thousands have lined London streets to see the athletes set off from Blackheath, many wearing black ribbons on their vests.

Barbara Stephenson, Charge d'Affaires at the US Embassy, is quoted in saying the commemoration underlined the "special relationship" between the two countries.

About half a million people will watch the race, which starts at Blackheath in southeast London and finishes near Buckingham Palace, passing some of the city's top landmarks, including Tower Bridge and Big Ben.

The Metropolitan Police announced they had reviewed security plans after the Boston Marathon attacks and that the extra officers would be used for "for reassurance patrols".

More search dogs would be deployed and marathon spectators are urged to keep their belongings with them to avoid sparking security alerts.

Extra security has been in put in place around the bags of the runners, with 34 trucks taking the backpacks of the thousands of runners from the start in Blackheath to the finish on the Mall near Buckingham Palace.

The bombs which went off in Boston are believed to have been placed in backpacks placed on the route.