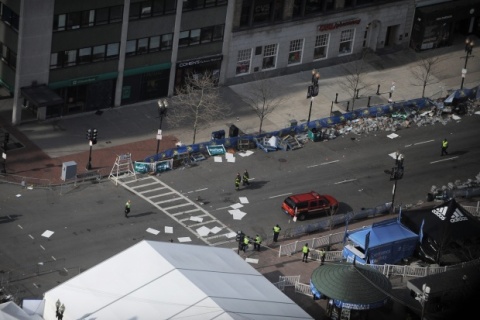 At least three people were killed and over 140 were injured in the two bomb explosions at the finish line of the Boston Marathon on Monday. Photo by EPA/BGNES

Security for Sunday's London Marathon will be reviewed after two fatal explosions hit the Boston Marathon, but the event will go ahead, officials say.

At least three people were killed and over 100 were injured in the two bomb explosions at the finish line of the Boston Marathon on Monday. The explosions occurred at about 2:45 p.m. Eastern Time, more than two hours after the first of the race's nearly 27 000 runners had crossed the finish line.

"We are deeply saddened and shocked by the news from Boston,” London Marathon chief executive Nick Bitel has said in a statement, as cited by the BBC.

Bitel later told the BBC that he "fully expected" the London Marathon, which first took place in 1981 and was completed by more than 37,000 people last year, to go ahead.

"The London Marathon has detailed security plans which are developed in conjunction with the Metropolitan Police,” the chief executive explained.

"They take account of many contingencies, including this type of threat and incident, but one can't be complacent and when it has happened, you need to then review those plans you have in place to see what else may be necessary.”