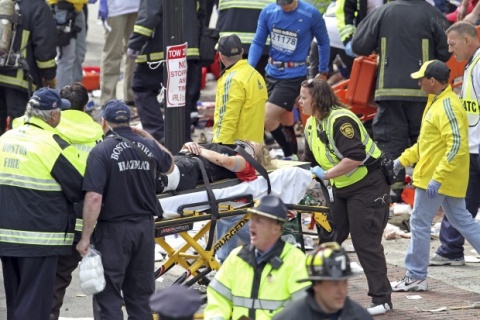 The deadly explosions in downtown Boston have killed at least three people and injured over 140, many seriously. Photo by EPA/BGNES

A young Bulgarian woman working in Boston has been just meters away from one of the devices exploding in the heart of the city, killing three and injuring over 140, many seriously.

Milena Peneva told bTV Tuesday morning that she heard two cannon-like sounds from the two blasts, one of which was louder.

She works at a company whose offices are located at the site of one of the explosions. Only an hour before them she has been outside, and later went to the office. One of the bombs has exploded right underneath her work place.

Milena and her colleagues have been immediately evacuated.

Another Bulgarian survived by miracle, as one of the bombs exploded near his car, Violeta Zhelyazkova, from the Bulgarian Culture Center in Boston told the TV channel. He was a participant in the marathon and after crossing the finish line went to his car. The bomb has exploded behind his back.

The death toll in the explosions has risen to three while more than 100 are reported injured, some seriously.

Meanwhile, Bulgarian Ambassador to the US, Elena Poptodorova, speaking for TV7, reported that there was no information about injured Bulgarians in the two bomb explosions at the finish line of the Boston Marathon.

TV footage showed bloodied runners and spectators being treated at the scene and the road strewn with debris.

The FBI has said that they were looking at a "potential terrorist investigation," but it's not clear whether the origin was domestic or foreign. However, President, Barack Obama, has been more cautious in speaking of terrorism, stating in a TV address: "we will find out who did this" and that those responsible would feel the "full weight of justice."

Huge crowds, including thousands of foreign visitors, were in the area watching the runners take part in the world's oldest annual marathon.

It was also Patriots Day, commemorating the opening battle of the Revolutionary War.

The explosions occurred at about 2:45 p.m. Eastern Time, more than two hours after the first of the race's nearly 27 000 runners had crossed the finish line.